On the night of Bealtaine, Sorcha Moore shares a kiss with Rory Farrell, a kiss that makes bluebells spring up beneath their feet …

The very next day, Rory leaves Wolf Wood. Has he really gone to Dublin, or is he closer than Sorcha thinks?

The year is 1652. Ireland is known as Wolf Land. Oliver Cromwell’s army has arrived. Properties will be seized. Land will be cleared. Wolves will be destroyed. But in the small village of Wolf Wood, Cromwell’s men face far worse enemies than in the rest of the country. The wolves here are bigger, stronger, more intelligent. Could these wolves be forming an army of their own? 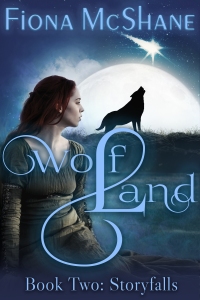 Sorcha Moore feels as though she has finally found her real home amongst the werewolves of Wolf Wood, but enemies may be closer than she thinks. With poisonings and attacks occurring within the wolves’ community, who can Sorcha really trust?

The werewolves must discover the culprit. And if they are ever to defeat the Tolberts, then they must do it fast.

The wolves have been divided, but will they fall?

In the castle’s dungeons, werewolves are being tortured and killed, but is this just another game of Lord Tolbert’s, or does he need the wolves for a darker purpose?

Sorcha Moore has been betrayed, kidnapped, and separated from everyone she cares for. But who has driven them apart, and why?

Sorcha needs to learn all she can about her enemies – and about herself – if she is ever going to defeat the Lord. But when she is finally told the truth of the Lords and the werewolves, it may not be the truth she wants to hear.

Will Sorcha return to Wolf Wood in time to save Rory and the wolf pack, or will she do as everyone seems to think she ought … and run?

Killing a Lord was just the beginning …

All that Sorcha and the werewolves want to do is find a place to call home. Their numbers are reduced. They are injured, grieving, and exhausted. But in the New World, they have a new Lord to worry about.

When Sorcha dreams of a town called Hope Streams, and a young girl accused of witchcraft, the pack know what they ought to do: run very far and very fast in the opposite direction.

There is a Lord at work in Hope Streams, and the whole town lives in fear. But if they choose to help the people, the pack could lose far more than they know …

All he wanted to do was buy and sell tea …

When Arthur arrives at the Indian palace of Vana, he believes he is there to make a straightforward deal. It soon becomes clear that Arthur was summoned to Vana for very different reasons.

Chandri, a young noblewoman, seems eager to marry him. But is she doing so of her own will, or are there Lords at work?

Arthur must gain the trust of Chandri, and work alongside the enigmatic man known as Guruji, if he is ever to discover the truth and free the people of Vana.

But Vana has its own protectors, guardians known as yakshas, and one of them may be able to offer Arthur a little help in return …

Book Six: Lord of the Bones

Did they really believe a Lord would keep his end of the bargain?

The pack travel to New Amsterdam, hoping that they will finally find their leader again. But once they get there, they have a chilling choice to make.

Lord Ambrose de Jong tells them that Rory will be returned to them, as promised. But only if they wait until midsummer … and only if they sacrifice another in his place.

After all they have been through, they are unwilling to trust the word of a Lord – and they are certainly not prepared to do as one says.

They attempt to retrieve Rory without the Lord’s help, but it begins to seem like an impossible task. Luckily for them, an old friend returns from India. And he might just have the power they need to do things their own way …